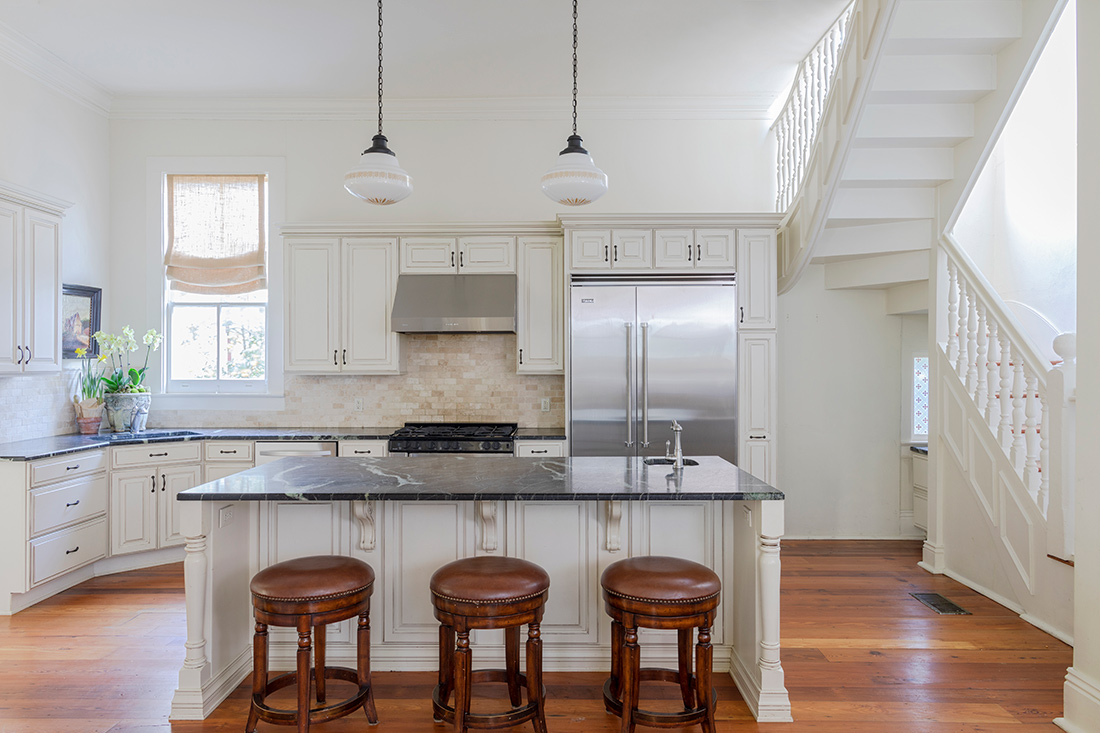 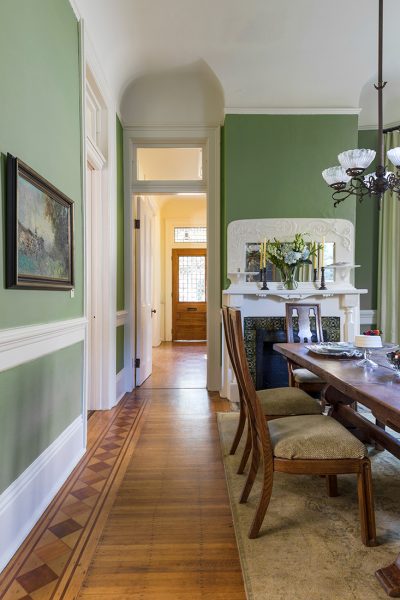 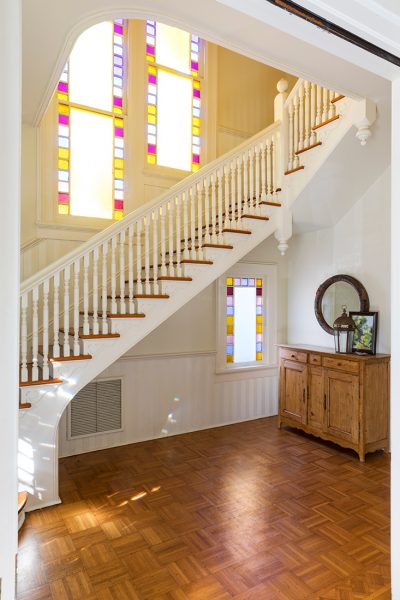 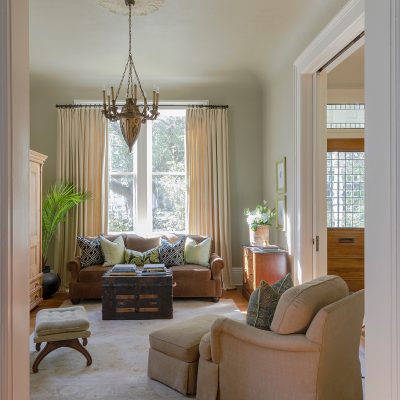 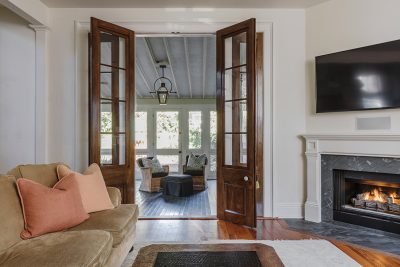 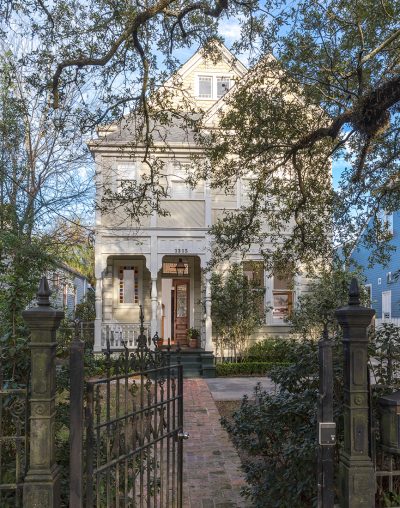 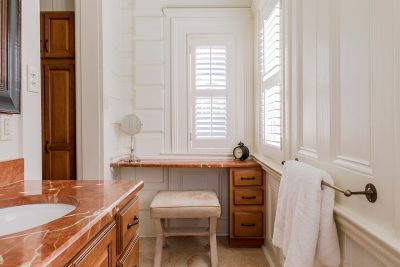 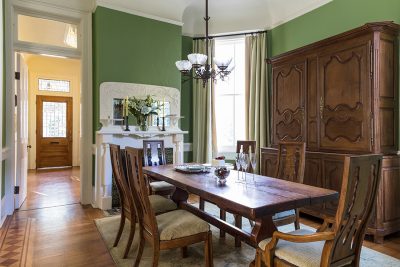 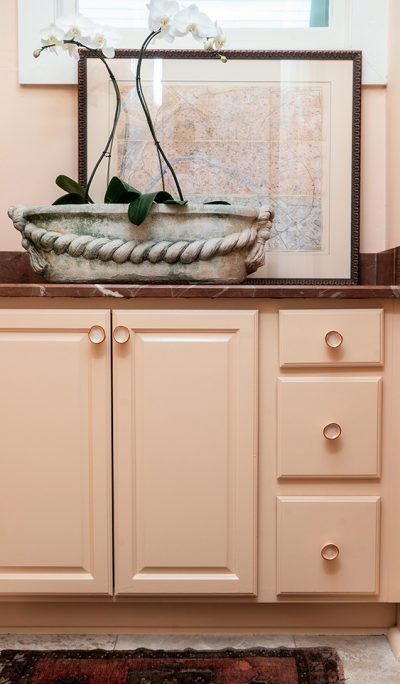 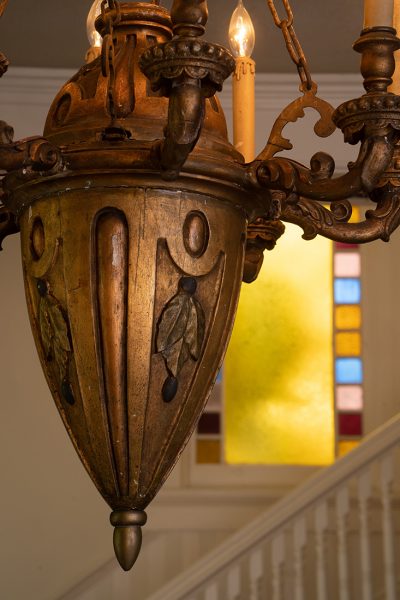 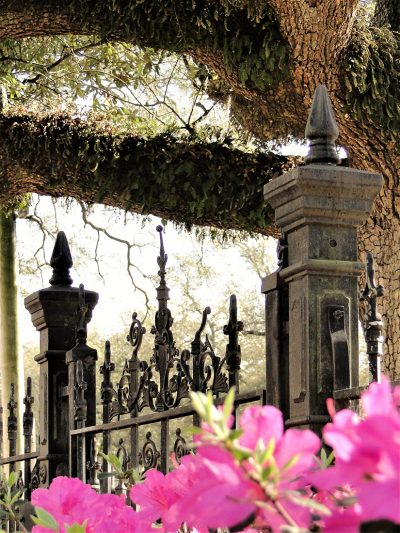 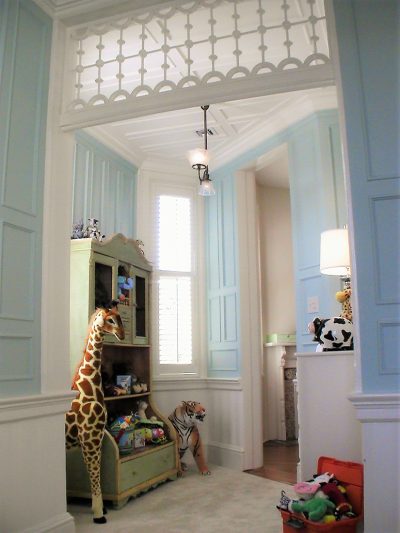 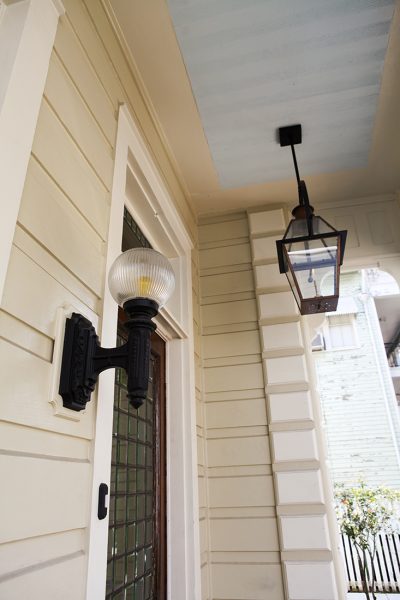 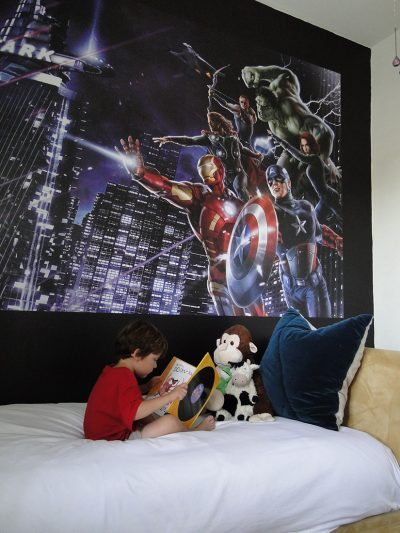 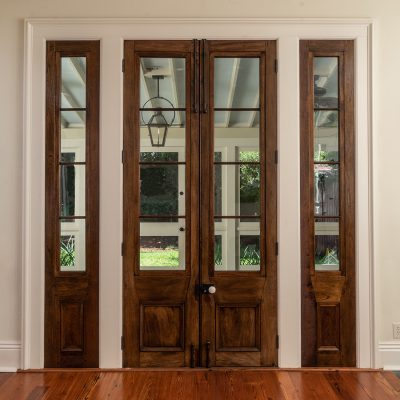 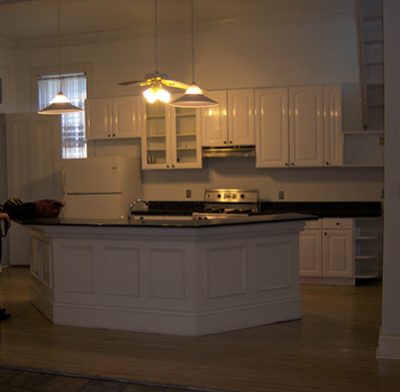 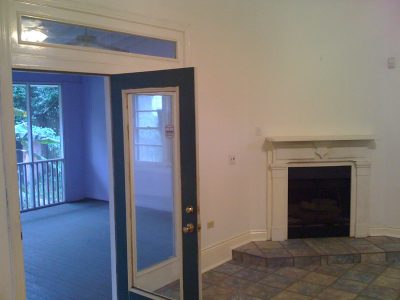 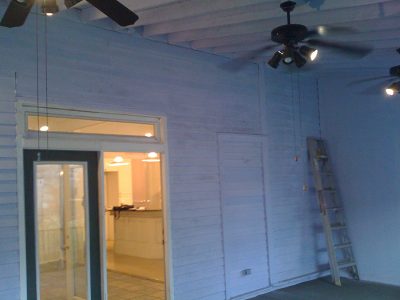 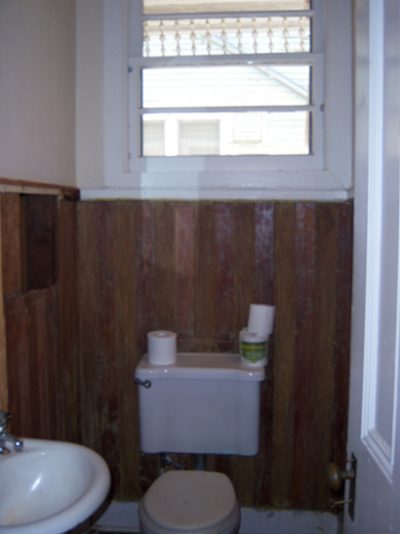 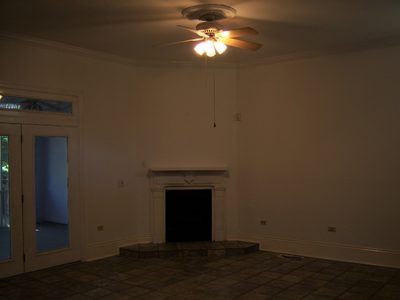 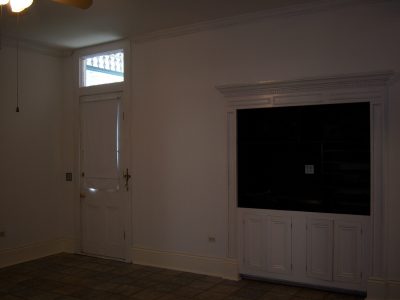 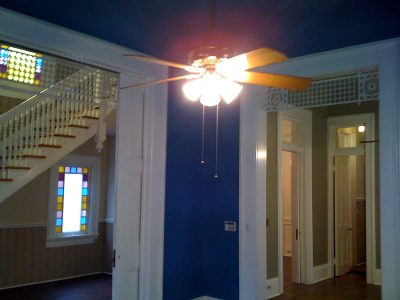 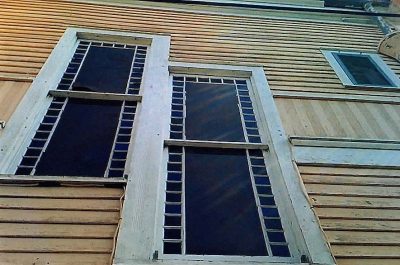 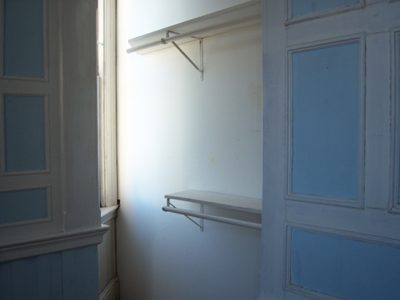 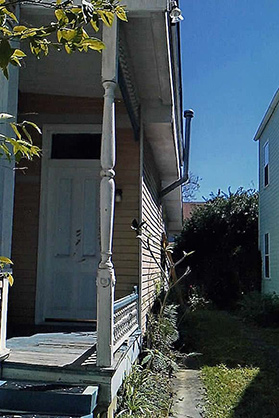 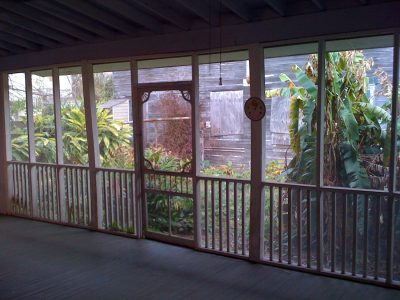 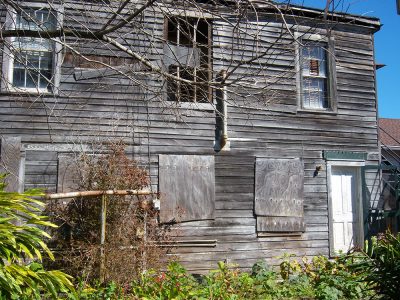 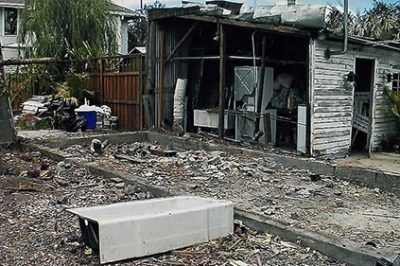 Existing Conditions
The house sat on the market for 15 months. When a realtor was asked to show the house, she replied “You don’t want to see that house. My last client couldn’t run out fast enough.” When the contractor came through to start work, he advised “Don’t walk into the master bathroom. You’ll fall through to the front porch below.” Original state: Not a single functioning bathroom, nearly bare weatherboards, purple tile flooring, rotted kitchen cabinets, and a dilapidated 2-story apartment in the rear yard covering the original privies from the late 1800’s.

When the house was purchased, the original 1870’s iron gate was found in the attic, the historic fence panels were laying in a heap in the back shed, and the stately iron posts were hidden inside wooden box posts. All of the pieces were measured and re-assembled into their original design. A new front walkway was laid using historic, reclaimed bricks.

Woolf Architecture strives to “think green” in terms of salvaging historic materials on site and reincorporating them in renovation projects. When the non-historic apartment building in the rear yard was deconstructed, it was disassembled by hand so that all of the old wood could be salvaged. The old barge board uprights used as sheathing under the weatherboards were repurposed as wide plank flooring. (When barges would come down the Mississippi River to the New Orleans port, the barges would be disassembled since they could not be used again and the barge boards were used in building construction.) The apartment’s old 3x floor joists were salvaged and used to create a thick wood countertop. Any wood that was not repurposed in the house was sold to a local lumber company specializing in reclaimed lumber. “Going green” can mean a lot of different things. In this case, it meant giving the barge board a third life and keeping all of the lumber out of a land fill.

Over the years, the house had been expanded multiple times. The kitchen was accessed through a back corner which meant walking an ‘S-curve’ through the house to get to the living room. This issue was solved by shifting the cased opening five feet to line up with the axis through the house. What resulted was a clear view through the house and a straight-forward circulation path to the living room. It also allowed for a more functional kitchen layout with a corner sink overlooking a beautiful kumquat tree. A large 4’ x 8’ soapstone island anchors the kitchen and is illuminated by two vintage pendants believed to have originated in the country’s second oldest athletic club.

One of Woolf’s specialties is to find historic, salvaged items to use in projects. The back ‘servant’s staircase’ was missing a railing – very dangerous for a family with 3 little children. Woolf scoured the architectural salvage shops and found just enough matching wood spindles to create a railing in keeping with the historic architecture. The spindles had actually originated from the old Bultman funeral home just three blocks away from the house. When the funeral home was renovated into a bookstore, the spindles were salvaged and taken to an architectural salvage shop in Mid-City. It was great to put them back to use in their old neighborhood.

The existing, tiny back door did not offer a view to the back porch and did not fit the architecture of the 19th century house. A pair of mahogany ‘gunstock’ style French doors (8 feet in height) from a Philadelphia auction house were brought in to add character. To maximize light in the living room, a carpenter was retained to custom mill sidelights to match the French doors. The mahogany doors leading out to a screened porch, the haint blue beadboard ceiling, and a Bevolo gas lantern round out the exterior living space.